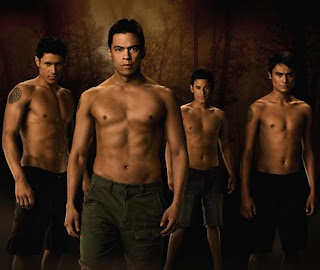 TMGR has learned that a relative of the publisher of this blog portrays the human werewolf character Sam Uley in the new hit movie The Twilight Saga: New Moon. Actor Chaske Spencer (second from left) has recently appeared in the movie 'Skins. He is originally from Lewiston, Idaho but his mother is from Montana with relatives in Michigan and Kansas. He moved to New York to study acting during his freshman year at college. Tidbit: His mother called up a relative to ask them to try to talk Chaske out of a cross-county hitchhiking trip he was on when Chaske turned up at the relative's home in MT.
Posted by Chet Eagleman Jr. - Publisher at 4:32 PM No comments:

TMGR is reporting that Fayetteville, Arkansas-based harp player R.J. Mischo and his band will be appearing at the 2010 Cow Pie Blues Festival held annually in August in Caledonia MI. Earlier R.J. had to scrap a late spring/early summer tour completely--one that would have stopped in Grand Rapids--because of a lack of gigs. It's nice to see when artists from down South are able to string enough dates together to get here and back home again. Check out
www.myspace.com/rjblues
Posted by Chet Eagleman Jr. - Publisher at 11:05 AM No comments:

Famed civil rights activist Morris Dees speaks at Grand Rapids Community College on Dec. 9 part of the Diversity Lecture Series 2009. Dees, co-founder of the Southern Poverty Law Center which was responsible for integrating the all-white Montgomery Alabama YMCA in 1969, speaks in Fountain Street Church at 7:00 pm. As an attorney Dees was one of the principal architects of an innovative strategy of using civil lawsuits to secure a court judgment for money damages against an organization for a wrongful act and then use the courts to seize its assets (money, land, buildings, other property) to pay the judgment. Dees' legal actions against racial nationalist groups have made him a target of criticism (to say the very least) from many of these organizations. He has received numerous death threats from these groups, and a number of their web sites make strong accusations against him and the Southern Poverty Law Center. More recently Dees obtained a judgment of $12 million against Tom Metzger's White Aryan Resistance. He was also instrumental in securing a $6.5 million judgment against Aryan Nations in 2001. Dees' most famous cases have involved landmark damage awards that have driven several prominent neo-Nazi groups into bankruptcy, effectively causing them to disband and re-organize under different names and different leaders. He is expected to talk about the resurgence of hate groups across the US since the Obama administration took office. Dees was most recently at Grand Valley State University in early 2000.
www.splcenter.org
Posted by Chet Eagleman Jr. - Publisher at 12:54 PM 1 comment: