CD Review: On the Record with the Kinsey Report 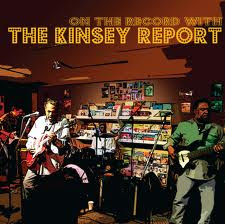 The Kinsey Report has always approached the blues with a boisterous mood. Perhaps they’re just trying to be heard above the clamor and din of their hometown Gary IN steel mills. Those inescapable industrial sounds add nothing to a rehearsal over at the house. Simpler yet, it could be the Kinsey's still possess a power trio mind-set. If hard hitting blues is what your soul seeks, give a listen to On the Record with the Kinsey Report. Take note of their version of the blues staple “Rock Me.” Everything you’ve ever heard about the Kinsey Report is here: blues tradition coupled with a dynamic unleashed as rock-n-roll. For some blues music lovers, the jolt is akin to walking around the corner into a stiff Chicago wind. But for longtime followers of the Kinsey brothers this revelation comes as no surprise.  Featuring Chicago blues and Kinsey originals, On the Record is inundated with a reggae groove--island rock-rhythms on lasting authority from brother Donald’s days with Peter Tosh. The influence for Donald's sure-handed lead guitar work was infused during his formative time alongside Albert King (Breaking Up Somebody's Home) and Albert Collins. Recorded on location in Bowling Green, Ohio, this CD/vinyl package offers a documentation of contemporary blues as rendered by veterans with a steadfast grit.
Posted by Chet Eagleman Jr. - Publisher at 6:09 PM No comments:

The World Famous Pontani Sisters at the Tip Top Dec 12 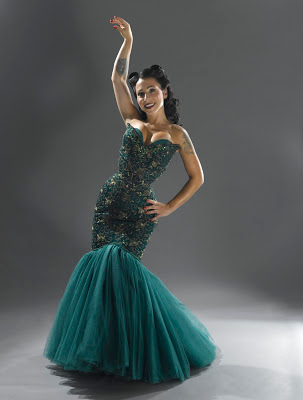 Burlesque star Angie Pontani earned the go-getter label early on. As a youngster she persevered through 5 nights of dance school every week. She was only 17 when she began making Carmen Miranda fruit headdresses and mambo costumes, putting them on her sisters, and wearing them when they did their act on Coney Island. Then they came up with a name: The World Famous Pontani Sisters. After realizing she might have a future in the entertainment business, Pontani set out to find a local burlesque scene in NYC. However the burlesque style which Pontani most related to fell on hard times 50 years ago. “In the 1960s more people had televisions and strip clubs became more popular,” Pontani said. “I like to say burlesque stepped out for a while.” Whether she knew it or not, Pontani was about to become a major player in the burlesque revival of the 1990s. “There really wasn’t anything going on when we started. We decided we'd better get something going,” Pontani said. “I was definitely a member of the group of people that helped bring this back simultaneously.” The scene really started swinging for Pontani and others when they started creating more staged performances. “We took influence from the golden era of entertainment in the 1940s and 50s.” A reviewer from Village Voice caught the Sisters act on the boardwalk. The rest, as they say, is history. “The recognition happened pretty quickly for us,” Pontani said. “No one else was really doing it like we were. We were contacted by many different venues to bring our show to various nightclubs and restaurants. Fairly early on in our career we had regular shows at places like Windows on the World in the World Trade Center.” Audiences are treated to a 90 minutes of  fast moving versatile revue. If you're naughty and not nice, Pontani promises stockings filled with sexy fun. “While we’re not directly taking scenes from the movie Holiday Inn, the inspiration is there,” Pontani said. “Particularly in the form of the over-the-top 1950s style entertainment featured in the film. We’ve got big dance numbers and group production elements. Everything revolves around the theme of the holidays. You can expect fabulous guest stars, solos, and duets.” Pontani points out that the show is also very classic burlesque. “We incorporate slight skit elements as a tip of the hat to the burlesque of mid-century.” Angie Pontani may have found businesswoman success as an adult but in her heart there is still a little girl in tap shoes. “I’m just doing what I’ve always loved,” Pontani said. “And that is dressing up as fabulously as I can and dancing around.”
The World Famous Pontani Sisters Burlesque-A-Pades Holiday Inn, 8pm, Dec 12, Tip Top Deluxe Bar & Grill.