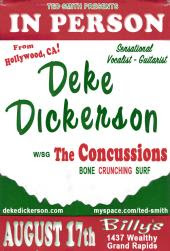 Mottled are the rockabilly music fans at Deke Dickerson’s shows. In the house you’re bound to see tattooed swing dancers swirling alongside mascara-lined punk rockers standing next to assorted guitar nerds. No matter the lot, these are the demographics that seek out future guitar museum curator and rockabilly artist Dickerson.
“I’m sort of unique in the rockabilly scene that way. I tend to draw from all types of audience members. We get some of the psycho-billies, sure,” says Deke Dickerson.
“But we also see people from all walks of life: the college kids, the old people, and whatever else. We have a very diverse audience.”
“I’m always glad when I win them over and they become regular customers,” he adds.
Among his many talents Deke now writes feature articles for Vintage Guitar and the Fretboard Journal, plus a bi-monthly column for Guitar Player magazine. That’s not too out of step. Dickerson started college with an eye on a career in journalism.
“It’s kind of interesting, all these years later, that writing is what I wound up doing. I’ve been writing a lot lately and writing about things that I would have wanted to write about anyway if I had been a journalism major,” said Dickerson during nine-hour drive from Kansas City to Minneapolis.
“I’m not going to complain,” said Deke of the seemingly win-win situation he faces.
Roots music fans will have a win-win on their hands when Deke Dickerson and his four-piece Ecco-Fonics hit Grand Rapids on Aug 17. Deke’s current edition of the Ecco-Fonics band includes drummer Pete Curry of Los Straightjackets and Australian bassist Jon Flynn. Piano player Amy Hawkins of St Louis hooks up with the group just in time for their appearance at Billy’s Lounge.
“Amy is a great piano player. I saw her play when we were in St. Louis earlier this year and she sat in with my band. She plays with a jump blues band called Miss Jubilee and the Humdingers. I liked the way she played so I asked her to come on tour,” said Dickerson.
Here’s a bonus for those fans of surf music. Deke says with the inclusion of Curry they’re doing more from the surf catalog, songs they wouldn’t normally do. This bodes well for those folks already coming out to hear the belly-flop beach sting of GR’s The Concussions.
But Deke wouldn’t come all the way to town without a special surprise.
“Did you hear the news story about the guy who discovered he had diabetes after the dog ate his toe?” Deke asked me.
“I’m writing a song just for the evening in honor of Big Jerry called I Miss My Big Toe.”
Deke Dickerson & the Ecco-Fonics wsg The Concussions at Billy's Lounge Tues Aug 17 9:00pm 21+ $12
Posted by Chet Eagleman Jr. - Publisher at 5:19 PM No comments:

TMGR is reporting that the end has really arrived for jazz jam-band Organissimo. Keyboardist Jim Alfredson continues to tour with Janiva Magness, which was widely publicized. Lesser known is the revelation that guitarist Joe Gloss was recruited by the The Order of Christ/Sofia religious sect and has moved out of state. Drummer Randy Marsh has reformed his group from the mid-90s, Blue Train, now called Big Organ. You may remember the Blue Train trio of Marsh, guitarist/vocalist Ricky Hicks, and Hammond B-3 whiz Chris Moberly from their regular weekday night gig at the former Rhythm Kitchen Cafe in downtown Grand Rapids. Big Organ sounded tight, focused, and bluesy at a recent hit on the patio of the Grand Rapids Art Museum.
Posted by Chet Eagleman Jr. - Publisher at 10:48 AM No comments: