Good bands don’t have to come across as meaningful to have meaning. You can be meaningful if your sole purpose is to entertain. This is one thing Eddie Angel of the instrumental guitar quartet Los Straitjackets is willing to reveal to your un-masked face. According to guitarist Angel, rock ‘n’roll lost the way of fun around 1965. “There’s a good term for what we do--it’s called vintage entertainment,” Angel said from his home in Nashville. “We’re fans of the way entertainment was until the mid-1960s. Then it changed from entertainment to everybody getting on stage and singing about themselves. It’s a real simple idea that’s been lost.” In pursuit of this seemingly lost basic mission since 1995, Los Straitjackets have recorded 16 albums (including a Christmas collection) of instrumental surfs-up sounds pummeled with root equivalent rockabilly and garage rock. Their vibrato-rich chewy twang was featured on an entire blues album by Eddy “The Chief” Clearwater called Rock ‘n’ Roll City. One of their non-instrumental albums is called Sing Along With…and features guest vocals from Big Sandy, Raul Malo, Nick Lowe, and Dave Alvin. But according to Angel not every singer who agreed to be on the recording could make it in. “We had Joey Ramone lined up but then he got sick,” Angel said. “Brian Wilson (Beach Boys) was going to do it but then he got wishy-washy; he’d go back and forth. Brian’s a funny guy.” “But we’re big Beach Boys fans, “Angel continued. “Brian writes great songs. Their harmonies are amazing. It’s like ear candy.” In their Mexican wrestling masks Los Straitjackets might look like the space invaders from the crop circle movie Signs but they’re much less scary to listen to. “There’s a certain sensibility that says rock-n-roll should be fun—mainly,” Angel said, noting there is one Grand Rapids band who shares this entertainment-first thought. “They’re really good musicians,” Angel said of The Concussions, whose members play alongside Angel in a garage band called the Neanderthals. “It’s not that common (anymore) but they want it to be fun for everybody. And Tommy Schichtel is a good bass player,” Angel said of the Closed-Head Injury Crew guitarist. Link Wray and The Ventures are the biggest influence on Los Straitjackets, Angel admits. Angel was even tapped to provide the Wray-like vibe on a recording by pre-Stray Cats rockabilly revivalist Robert Gordon. Angel and company look forward to a return visit to West Michigan. “I really like Grand Rapids,” Angel said. “I think it’s a pretty cool rock ‘n’ roll scene.”
Los Straitjackets wsg The Concussions at Billy's Lounge on Sat Jan 1. Doors 8:30, show 9:30.
Visit Los Straitjackets MySpace page
Posted by Chet Eagleman Jr. - Publisher at 6:05 PM No comments: 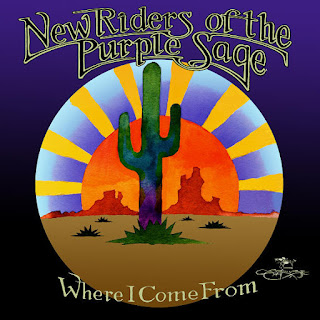 There is a quote that reads “life is a journey not a destination.” The culmination of experiences along the way is what matters most. It’s unclear whether this famous line by Ralph Waldo Emerson applies to a life that actually begins with a journey. But that’s how it happened for renowned pedal steel guitarist Buddy Cage of the New Riders of the Purple Sage. His musical trip began with a journey and an infamous one at that. By 1970 Cage had hooked up with Canadian duo Ian & Sylvia just as their influential country-rock group Great Speckled Bird was taking off. Before he knew it Cage and Great Speckled Bird were immortalized in the film Festival Express, a documentary about a traveling music festival of the same name by train across Canada. Also on the train were the Grateful Dead, Janis Joplin, Buddy Guy, and Delaney & Bonnie. During the shooting of the movie Jerry Garcia took a keen interest in the pedal steel guitar playing of Cage. Unbeknownst to Cage at the time Garcia was eyeballing him as a substitute for a new band Garcia was in called the New Riders of the Purple Sage. According to Cage, Garcia was becoming so busy that a sub made sense. “Garcia really tore into steel playing around 1969 and just went nuts with it,” Cage said. “He kept it up until NRPS put out a recording which is what they did in the day. Prior to that Jerry was just plunk-plunking around on the steel; he wasn’t that good at it. But during this time he was doing unbelievable shows playing acoustic guitar with (David) Nelson and a couple of the Riders but it was mostly Grateful Dead guys that formed an ad-hoc beginning set. Then they would switch to an electric New Riders country set and then they would switch over to the standard Grateful Dead two-sets which kept Jerry onstage for up to four and-a-half hours. Then that became too much even for Garcia. In the end NRPS were really getting good but Garcia wasn’t getting any better (on pedal steel). He was ready for someone to take the gig and I was the guy. Plus it was time for Garcia to go do serious work on Working Man’s Dead and American Beauty.”

The off-shoot band of the Grateful Dead then went on to tour extensively and record landmark albums like Oh, What a Mighty Time. In between all the craziness Cage was asked to record with Tommy James and the Shondells, fellow Canadian Anne Murray, and Bob Dylan. Something about Cage’s style of pedal steel playing attracted Dylan’s ear. Cage then recorded on perhaps Dylan’s most personal album Blood on the Tracks. "The stuff that I do is different than other people," Cage said. "That's what it's all about anyway--as an individual playing, right? On the Bob Dylan Blood on the Tracks stuff for instance, the cut "Meet Me in the Morning" defines a whole different way of steel playing. It was just something that I knew how to do. It wouldn't have fit with the Nashville sound of the day. They used asked me 'Why don't you move down to Nashville?' I would say ‘Why don't you kiss my ass?' Just so I can fit into some kind of mold or plug-in thing? I don't think so."

Even then those developments were a long way from when Cage starting playing music. In the early 60s he had to realize the only outlet for his instrument at that time was country music. Just prior Cage had been newly influenced by pedal steel master Ralph Mooney (Merle Haggard, Buck Owens). The only problem was Cage hated country music. “I never had a desire to be a country western player, " Cage said while he waited for sound check in Chicago. "When I was kid I thought it was cornball shit and hayseed. It just didn’t work for me. I ended up with country and western music until I found really good players and good bosses who taught me what was good country, and what was not. They gave me a great education into what was good bluegrass and stuff that was hard to listen to.” One of those good bosses ended up being early rock-n-roller Ronnie Hawkins, whose claim to fame about that time was having hired the band before they became The Band. Today the New Riders still perform and record. They have a new record out called Where I Come From. I asked Cage if he ever thought what’s left of the Dead and the New Riders would hook up for shows like they famously did. “Why yes,” Cage said. “We have a New Years gig in Pennsylvania with Bill Kreutzmann (Dead drummer) and Papa Mali in a group they call 7 Walkers.” So yes, from reluctant country and western pedal steel player to jam band NRPS and beyond, Cage and company are still around and doing fine.

The New Riders of the Purple Sage at the Livery, Benton Harbor, tonight 9 pm (doors 8). More info at:
The Livery website
Posted by Chet Eagleman Jr. - Publisher at 2:18 PM No comments: 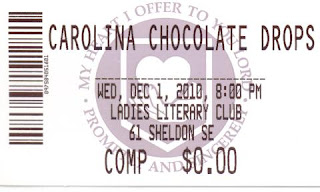 (Originally published on Dec 8, 2010 in the The Collegiate student newspaper at Grand Rapids Community College)


In the musical world of the Carolina Chocolate Drops one kazoo and two curved bones are all you need to make authentic sounds. Then pass around a fiddle, jug, and banjo and you’re all set. This was the musical mission as executed by the Durham NC trio in front of a sell-out crowd at the Ladies Literary Club on Dec 1. The Carolina Chocolate Drops not only entertained and engaged but enlightened and informed on America’s lesser-known musical footnotes. With their old-timey string band presentation, complete with exchangeable instrumentation among members, the Chocolate Drops are one of very few African-American bands (along with NY’s Ebony Hillbillies) performing this time-honored historical tradition. They wasted no time getting into the gospel spirit by revving up “Starry Crown (Chase Old Satan through the Door)” as their first number. Throughout the night each member took a turn mentioning old-time fiddler Joe Thompson as vital inspiration. Fiddler Justin Robinson played the straight guy mostly during the colorful narratives of his band mates. Singer and banjo player Rhiannon Giddens laid it all out during her stunning solo vocal number, the Celtic flavored ballad “Reynadine” from their acclaimed release Genuine Negro Jig. If there was one standout among this talented group it had to be Dom Flemons. Flemons is not only fine acoustic guitar player but he is an absolute master on the bones, a basic percussion instrument that specializes in triplet rolls. In Flemon’s imaginative fingers the bones are transcended from lowly calcium and phosphorus deposits to performance hall-worthy musical devices. One gift of the group is their ability to bring a world music vision to their shows as heard in the reading of “Snowden’s Jig.” The audience response to “Cornbread and Butterbeans” was among the most rousing of the night. Their most modern sounding song, “Hit ‘Em Up Style,” with microphone beats from Robinson closed out the main portion of the show. Demonstrating this genre as an important link to all forms of contemporary music, and now with a sound young folks might relate to, the tradition of African-American string bands seems in good hands. With their enthusiasm clearly unabashed, we should all be grateful the Carolina Chocolate Drops are giving this type of music an invigorating shake of youthful musicianship.
Posted by Chet Eagleman Jr. - Publisher at 5:00 PM No comments: