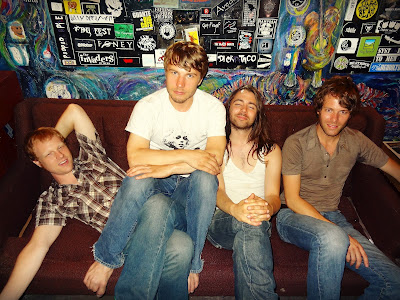 Nathan Kalish just wants everyone to have good start to the school year. It doesn't matter to him if you're done with school or you've just signed up for classes, Kalish and his band the Wildfire look to return rested and tan for a show at the Pyramid Scheme on August 31. This particular back-to-school special, featuring up-and-comers Gunnar & The Grizzly Boys, is one that Kalish hopes will appeal to the professional student in all of us. "We wanted to do a back to school show for the college kids," Kalish said en route to a recording session. "Our music fits real well with Gunnar's. Each band has a similar fan base so this should be a good ticket." Furthermore Kalish (pictured third from left) can sense the potential of the evening by the relevant musical styles of these two bands. "Both of our bands are guitar driven," Kalish said. "Gunnar comes from the modern country side with some pop rock sound thrown in. The Wildfire is outlaw country with pop sensibilities." The show at the Pyramid Scheme, along with the Legal Immigrants, marks the return of Nathan Kalish the promoter. "I promoted all our home shows here in the past seven years," Kalish said. "It can be kind of stressful to say the least. Gunnar is such a powerful band live it makes more sense for us to open up for them. Fans of this guitar forward kind of sound might take this opportunity to see Kalish and company perform before he embarks on a 2 1/2 month long tour with Nashville's Deadstring Brothers. "I'm going to be the opening act for them," Kalish said. "I'll be solo playing my originals. I've toured with them before as a guitar player and a bass player."