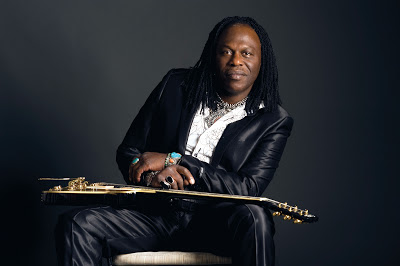 If they ever make a movie about the life of firebrand blues guitarist and soul vocalist Joe Louis Walker they should title it From the Tenderloin to la Ville des Lumières. And they should make a movie about Walker because he's everything you've ever heard about the American blues experience. The journey of The Man So Nice They Named Him Thrice is one of the total human experience today.

Just a snippet of his career accomplishments would make a great story line. The plot takes a nice turn when Walker returns to San Francisco State University to finish not one but two college degrees.

Walker, the youngest in his brood, grew up in San Francisco but his parents were originally from the South. Money might have been tight but his folks took the time to instill an essential work ethic.

“My family used to pick different agricultural stuff in the area,” Walker said by telephone during a recent interview. “They taught me to take advantage of hard work to open doors that might not have been open to them.”

As a teenager Walker was soaking up the psychedelic rock music of the day and hanging around with people like Mike Bloomfield, Jimi Hendrix, and Jorma Kaukonen. He was learning the blues first-hand from Lightnin’ Hopkins at places like the Matrix. Walker would soon embark on a series of lifetime gigs at Eli’s Mile High blues club in Oakland.

He was heralded as one of the best of his generation with all the well-deserved notoriety imparted. But to hear him say it, one of the best things he ever did was to go back to school.

“I went back to address some unfinished business and further my personal development,” Walker said. “I took time to work on self and music. I found that I was able to become more fluent in all things that were connected to me.”

During his time at SFSU Walker had given up the blues rock and was playing in a gospel group called The Spiritual Corinthians. When he was done with school he decided it was time to return to the blues.

“I found I could bring different sensibilities to the blues with a gospel background,” Walker said. “I was getting fresh handle on what I was trying to accomplish and the blues is my mother tongue.”

Walker never strays far from the gospel tradition. “Soldier For Jesus,” from his latest release Hellfire (Alligator), features harmony vocals from The Jordanaires and all the energy and exuberance of get-up-and-shout praise music.

Although Joe Louis Walker has yet to field any offers for a film about his life, he says he might have a project which puts to use his bachelor’s degree in English (he has another in Music).

“If I ever write a book I’m going to call it ‘From the Projects to Paris,’” he said with a laugh. “It feels like I’ve gone from the outhouse to the penthouse.”

More Things on The Man So Nice They Named Him Thrice: http://joelouiswalker.com/

Posted by Chet Eagleman Jr. - Publisher at 1:19 PM No comments: