Sharrie Williams at Billy's Lounge Jan 22: “I’m going to get right into your spirit.” 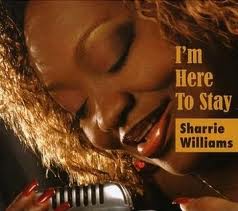 Sharrie Williams gonna tell you one thing; it’s about to get all spiritual up in here. Dig: her live shows dare conjure up such power side music that it just about threatens the known senses; this, friends, is when her inner side arises. "I'm just grateful when I'm able to use the lyrics of my songs to bring forth that power,” Williams said of her mostly original compositions described as “rockin" gospel blues.” The Saginaw-native Williams says she was raised in the gospel and still, as expected, infuses that flavor in her music. But her sound represents all the various shades of blues, she says. So while not a traditional blues band per-Se, she somehow incorporates into her show the hard-driving Tina Turner; the powerhouse blues of Etta James and Koko Taylor. “I do know some shuffles. I want to touch everybody in the audience and not just one sect of people,” Williams said. “I think that’s what's made me a ‘keeper’ in this business. People call me back because I love to entertain and I bring the audience into the experience.” Williams brings her 5-piece Wiseguys band back to Billy’s Lounge on Jan 22 on the eve of a week-long tour of Dubai. According to Williams there is more to helping people forget their problems for a of couple hours on a Saturday night. “I say forget about your problems and then get over them if possible,” she said. But that thought can be a tall order for just about anyone, Williams admits. “Nowadays with the killings in Arizona and the foreclosures and such, we live in a very blue moment.” But Williams proves again the importance of real belief. “We have to be strong enough to overcome all of that," she explains. "A lot of times people go into deep depression and they don’t come out. I want to be the blues buster and bust you out of that depression.” In substance abuse recovery for fourteen years Williams proves the Creator can see anyone through. “We all have the power to make it,” she said. “There’s a song on my latest album (I’m Here to Stay) called 'Power'. It's about the power we have within ourselves,” said Williams. “A lot of it is laying there dormant and we don’t know how to tap into it. That’s why I call it a musical movement. It’s there--we just have to find it. And we are going to find every bit of that power on the 22nd of January," Williams said with a hearty laugh.

Try as he might, Greg Nagy could hardly conceal his excitement. Nagy was getting worked up about his gig at Billy’s Lounge this weekend when a new development unfolded. No wonder. It seems Nagy had just secured Hammond B-3 player Jim Alfredson as a special guest to join Nagy’s band when they open up for vibrant vocalist Tad Robinson on Saturday night. Even though Nagy and Alfredson have an affiliation that goes back to their time with the Root Doctor, Nagy knows opportunities like this don’t always come together so easily. “Jim is helping me produce my new record as we speak,” Nagy said.”We’re in the studio now. Even so there are a few tunes that Jim knows that we haven’t done out live yet. I don’t worry because Alfredson is really good about thinking on his feet as far as just following along,” Nagy said of performing newer songs that might not be complete as they’d like. If that doesn’t work, there’s this. “Jim will pull stuff out of the hat which is kind of exciting. And when in doubt he can just lay out (improvise musically) and it’s not the end of the world,” Nagy said. Having a player as accomplished as Alfredson coming off the bench before half-time, so to speak, affords Nagy a coveted chance “to build a (better) show.” According to Nagy this sort of show-building worked out well when Alfredson joined the Nagy trio of Jim Shaneberger (bass) and kazoo playing drummer Kevin DePree at the Old Town Blues Festival in Lansing last September. “I think we’ll do half of the show as a three piece,” said Nagy. “Then I might have them sit down and I’ll do a solo number, a finger style thing. Then call the trio back up and get Jimmy up there as a special guest. When we call up Jim it clearly changes the sound and the choice of material you can do. The whole pacing of the set is more dynamic when you have a special guest.” Nagy sounded equally wound up about the chance to sit and watch Tad Robinson and not just play in his accompanying band on Jan 8. With good reason: Robinson brings to town a piece of blues history in the fabled Delmark records rhythm section of Harlan Terson and Marty Binder. Between them, these two Chicagoans have experience with just about every important blues artist of the last 35 years. For bassist Terson it came from recording with Lonnie Brooks and Otis Rush among others. For drummer Binder it was playing the kit behind Albert Collins & the Icebreakers and fellow Delmark label-mate Ken Saydak. “They’ve got that Chicago thing going on because they’ve been a part of that scene for so many years now,” Nagy boasts. “Marty has that ultimate “fat-back” beat which you don’t find too often.” Longtime Grand Rapids music lovers may remember seeing Binder with Saydak at the former Rhythm Kitchen Cafe. Rounding out Robinson’s side of the band is the Indianapolis connection of Kevin Anker (Delbert McClinton, Darrell Nulisch) on keyboards and Paul Holdman on guitar. And what more could Nagy say about Tad? “He’s a singer’s singer and an excellent harmonica player," Nagy explains. "In my opinion Tad doesn’t get nearly the credit he deserves for the way he plays the harp.”