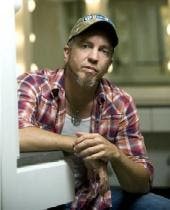 We caught up with soul singer/songwriter JJ Grey as he busied himself finalizing production for his new album due later this summer. He was in the middle of getting copies made of the original recordings and sending the disc to be pressed. Otherwise preparing to depart for and a show with Buddy Guy at the Fredrick Meijer Gardens Amphitheater on June 17. This trip comes days after a short Canadian tour with George Thorogood. One of the first things to come up is the oil spill.

“We don’t have any shows coming up along the Gulf coast so that’s not an issue now,” Grey said of the worsening slick in the .

“But it will affect me somehow that’s for sure. I don’t know how but it will,” Grey said.

One way Grey's livelihood might be affected is if no one wants to hit the on vacation this year because they can’t go to the beaches. If bars and clubs are struggling keep the doors open they won’t need the extra entertainment expense. It seems the ongoing news of the spill’s magnitude hits Grey hard.

“I live by all kinds of lakes and streams. We’ve got fresh and salt water down here. I can get to the ocean and surf in about 35 minutes. I live in paradise,” Grey said ever the outdoorsman.

His song "Lochloosa" helps illustrate his place among nature in his home state:

Homesick but it's alright; Lochloosa is on my mind. She's on my mind.
I swear it's ten thousand degrees in the shade. Lord have mercy knows - how much I love it. Every mosquito, every rattlesnake; every cane break – everything. Every alligator, every black water swamp; every freshwater spring - everything
All we need is one more damn developer tearing her heart out. All we need is one more Mickey Mouse. Another golf course, another country club, another gated community. Lord I need her, Lord I need her, and she's slipping away…

JJ Grey the musician lives in Northern Florida about half-an-hour west of and another 25 minutes from the udder–like chunk of densely-wooded forest protruding into the panhandle. Also living near him with the mosquitos and rattlesnakes is a well-known grasshopper. Hear tell it’s a cool grasshopper; you know, as insects go. Kind of spunky, resilient, and familiar. But evidently there's been some talk among the townspeople. Leave it to Grey to worry that people might say he is comparing himself to the grasshopper somehow, of all things.

“This is not the case," he said of the gossip.

"I could only hope to be as cool as that grasshopper. The old timers down here call it the Georgia Warhorse. It’s got a folklore all its own.”

Founding players and writers wrote about things they saw everyday like trains. Other local sights and sounds inspired Southern writers were church bells ringing, steamboat horns bellowing, and shrill whistling. True to this storied writing form, Grey writes songs about elements of life in his neck of the woods.

“Things like the Georgia Warhorse are just part of my environment down here. I write about what I see,” Grey said.

But unlike the four-piece band that just toured with Thorogood, Grey plans on bringing a big Southern-style soul revue band to the complete with horn players and guitarist Daryl Hance. This way you'll get to experience the spirit of Stax records and songwriters like Tony Joe White. It’s not often he can get everyone together with so many schedules to deal with but it’s an opportunity he tries to enjoy every time.

“I encourage my players to go do their own things when they feel it necessary. We’re all adult men and try to deal with it as such. I appreciate these guys but I don’t want them to feel like they owe me anything,” Grey said.

His new CD on Chicago-based Alligator records, Georgia Warhorse, is due at stores and online August 24. A brand new song collaboration with Toots Hibbert (Toots & the Maytals), who contributed vocals, has Grey particularly excited.

"I had Toots up for the Blackwater Sol Revue. He will always be one of my heroes. I was excited to hear he'd participate in this project, so I sent him demos of me singing all the parts of the song. He sent it back and it sounded great in a way only Toots can," Grey beamed.

If you’re wondering if Georgia Warhorse will sound similar to its successful predecessor Orange Blossoms (Alligator), Grey offers this.

“I recorded it in the same studio as Blossoms with the same gear and some of the same musicians. All of my releases have featured different sets of players and this is no exception.”

(As of Tuesday 6pm only about 60 tickets remained)