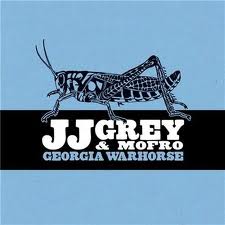 This much I know about JJ Grey: He likes his ice water icey cold, his Thai food spicy hot, sexy soul music, and the women even hotter. OK, I'm not exactly sure about the last one. Seems the only thing hotter than any of this is when JJ and company hit the stage running. You may have seen this action back in June when JJ Grey & MOFRO opened up for Buddy Guy at Meijer Gardens. Grey is a complete bandleader spinning around on his cowboy boots, pointing out band members for their solo, and otherwise letting the band do their thing. He told me afterwards that the reason he didn't do an encore was because he wasn't sure how much time he had left after forty minutes (he had about 5 minutes we figured later) and under no circumstances did he want to go a second over into Buddy's time slot. I found this not only smart but also extremely respectful.

Then come to find out JJ is a wiz at remotes and televisions. He single-handedly averted an uprising after that show when a tour bus full of basketball-crazed men couldn't get the NBA finals on the satellite TV. They said "don't worry, he'll get it; he always does." I'll admit I was skeptical (the thing was programmed in Florida). But sure enough he got it to work. In a snap it was game seven of the Celtics/Lakers championship matchup without missing a single inadvertent whistle.

Earlier that day we found a Thai restaurant for JJ to get take-out. During the afternoon we spent together riding in the car and getting his hair trimmed outside his bus in the hot sun, he talked about his grandmother's influence on his storytelling and in particular the time and care she took in sharing tales of the grasshopper known as the Georgia Warhorse. He seemed patient with the new-to-the-tour-that-day bass player (and with the radio guy hanging around) even going over some bass parts while still writing the set list for the evening.

JJ was a guest on my afternoon radio show that day at WYCE-FM. His publicity people told me he probably wouldn't be doing a live song on my shift. We went to pick him and after a quick stop at the local grocery store for protein bars, he surprised us by showing up at the studio with an acoustic guitar in hand. 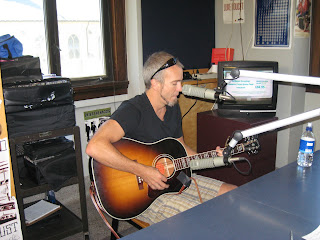 I've interviewed on the radio and in-person (or at least sat-in) plenty of musicians and newsmakers: Ben Vereen, Bela Fleck, Tony Zamora (Tremoloco) and Cougar Estrada (Los Lobos), John Trudell, Donald Kinsey, Gary Primich, Robert Ward, and The Avett Brothers among others. But this one was special for one of my shows. First, I don't think anyone has ever debuted a soon-to-be-released single like JJ did this day. But we got to talking, and "The Sweetest Thing" off the forthcoming Georgia Warhorse was the one he wanted to do. Secondly I don't know if it was the Meijer's protein bars or what but he really nailed it. He sang like he was meant to live it and living the song like it was meant to be. This is a real person delivering worthwhile music the only way he knows how--with truth. If you go to see a JJ Grey concert (and you should) be ready to dance, sing, and otherwise feel human. Music like this doesn't come to town everyday.